Q: How do you know that you influenced the Beatles? CD: "They attended a lot of West Indian parties. They used to hang out a lot with Jamaicans - out of that they just started something. Even with the long hair thing, it was Rico Rodriquez who went over there and being a brown guy with long hair they (Beatles) liked it and started to grow their hair. They attended a lot of parties that Rico played at because when Rico was in East London he real1y kicked up a storm man. We influenced the whole pop scene in Europe." From an interview with C.S. Dodd, held in 1994, see: HEARTBEATNEWS.COM 2004

"'I did plenty of work for Dandy [Livingston], and Webster and Desmond and Joe [Shrowder, Bryan and Sinclair respectively - Trojan]. I also did work for Pama - they all used to call me - I never pestered for work, it came to me.

'I was a freelance - and Joe Mansano I did work for as well, and he only paid sesion fees. Me and Dice the Boss would play over backing tapes. He's also called Pama Dice and maybe BaBa Dice.' So while some of Mansano's finest recordings, such as the classic "Skinhead Revolt", featured the DJ jiving of Dice and Rico's jazz-fuelled trombone, in some cases the actual session was dubbed over existing rhythm tracks." (Rico quoted by Michael de Koningh, 2003, pp. 70/71)

Berlin, Metropol Theater: The Specials with Rico played the best concert I've ever seen in life. Never before and never after that show I felt such a positive energy. Reading the book of Horace Panter it seems to me that the band had exactly the same vibes. - Jan. 2008, User:JamaRico 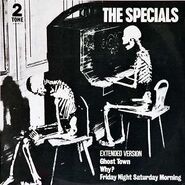 The single was recorded in an atmosphere of Magaret Tatcher's politics against the immigants, exploding unemployment figueres and the first riots in Brixton. Then the record was released on June 20 ... "The National Front announced a march through the town on the same day. "The gig was half-full," says Horace Panter. "There were rumours the NF was going to turn up and attack."

Then, on July 10, Britain erupted. A second wave of rioting in Brixton spread throughout the country. ... The next day, Ghost Town reached number one, developing a terrible currency not even Dammers could have predicted.

"It was an incredible moment," he says. "I can remember Rico [the Specials' veteran Rastafarian trombone player] saying, 'Jerry, if your army combine with my army, it's a revolution!'" (Ska for the madding crowd, by Alexis Petridis, in: The Guardian, March 8, 2002)

"More interesting are the 2 Top Of The Pops appearances the band made to promote the single. Both performances saw the band expanded to a 11 piece which included Rico, Dick Cuthell, Rhoda Dakar and ex-Swinging Cat, Paul Heskett on flute." 2Tone.info 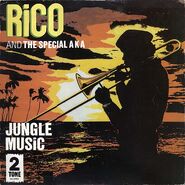 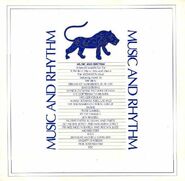 Music And Rhythm, Cover
Add a photo to this gallery

Rico, from the video

Cortney Pine, from the video
Add a photo to this gallery

Rico during an interview backstage at Club Ska, 8.1.

Total Madness. Gaz Mayall introduced the band as the greatest ska band in the world, and few could say he was wrong as Madness rocked out an hour-long set with two encores They began their set with the hit 'One Step Beyond' proceeding with a number of crowd pleasers, all the while interjecting interesting bits of banter. It was a natty performance as Madness's frontmen were in matching suits and patent leather shoes, neckties pulled tightly around their neck. A highly of the show was saxophonist Rico Rodriguez who has made multiple appearances as a session musician throughout the 70's to the present day. After performing their allotted set, the crowd cheered them back as Gaz Mayall returned, leading the chant M-A-D-N-E-S-S. And the band obliged, playing a rare song not performed in 25 years, apparently once commissioned for a local automotive company. Reported by sean (2006.07.29 / 12:33) at Fujirockexpress.com

Absolute pick of FujiRock 06 = Madness. These guys are long time idols of mine. I grew up listening to their terrific tunes after I bought a pirate copy opf one of their albums from a dodgy guy at my high school. This cassette hailed from Thailand, and the lyrics printed bore little to no resemblance to the actual thing. These guys showed Japan this weekend that they haven't lost a thing in their near 20 year hiatus. Report by Dom, 30.7.2006 at Fujirockers.com

Both shows in Spain started with a documentary called "Rico Rodriguez - The Legacy". The trailer can be seen

at Liquidator Music
or at youtube.com 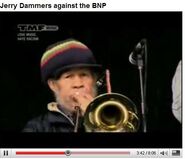 w/ Jerry Dammers in London
Add a photo to this gallery

"Disguised in Ancient Egyptian stageware, the 18 members of the Orchestra became visible through their playing. Though each was awarded generous solo slots and introductions, they would be happy to admit they were overshadowed by the mere presence of the legendary ska and reggae trombonist, Rico Rodriguez." [3]

Retrieved from "https://ricorodriguez.fandom.com/wiki/Day_by_Day?oldid=6201"
Community content is available under CC-BY-SA unless otherwise noted.