"The Singer Wuta Mayi was named Gaspard Wuta after he was born at the General Hospital Leopoldville on August 3 1949, but he grew up with the name of Pascal as Pascal Gaspard Mayandi, his maternal grandfather. He did all his studies in Kinshasa where he started at the primary school Josephine Charlotte. He continued his studies at the technical school Saint -Andre in Limete and continued at the Ateneo in-Ngiri Ngiri.

In 1967, while still studying at the Josephine Charlotte school, he began his musical career in the orchestra Jamel National in the town of Dendal. There he met for the first time his friend Emmanuel Kiala / Aime Kiwakana. Orchestra Jamel which was started by brothers Fauvette and Tony Kaninda was a real hotbed of talent. Saxophonist Empompo Loway / Deyes or Professor, guitarists Bavo Siongo / Bavo Marie-Marie, Makosso, Dave Makondele and singers Marcel Loko / Djeskain, Amba / Zozo, Mpoyi Kaninda / Djo Mpoyi and many others made their debut in this orchestra.

A member of his family named him Blaise and from then on he was called Blaise Pasco. Blaise-Pasco began his professional career in 1968 in the orchestra Bamboula. In this orchestra created the same year by guitarist Anthony Nedule Papa Noel he met his friend Paul Mansiamina Mfoko called Bopol. ... Orchestra Bamboula which made its official debut in February 1969 in the town of Limete with the dance Mambeta included Blaise Pasco, Aime Kiwakana, Pires and Tino Mwinkwa as singers, Jeff Lunam saxophone, Mangenza on drums, Bopol Mansiamina on rhythm guitar and, of course, Papa Noel lead guitar.

Still in 1969 orchestra Bamboula was chosen to represent the Democratic Republic of Congo in the first Pan-African Festival of Culture in Algiers. Early in their careers the two friends soon began to represent Congolese music beyond the national borders. We are also in the midst of commemorating the 40th anniversary of this continental event immortalized in a wonderful song by Les Bantous de la Capitale who represented Congo Brazzaville.

It's in the Algerian capital that Pascal Wuta / Blaise Pasco and Paul Mansiamina / Bopol, celebrated their twentieth anniversary. They travelled in almost every country in Africa. Both 60 years of age this year (2009) and continue to tour around the world. In late 1969 and early 1970, Bopol Mansiamina and Pascal Wuta joined the band Rock-a-Mambo of Philip Jose Lando / Rossignol. This orchestra is not the same one which was formed in 1957. When the musicians from Brazzaville left Kinshasa to form Les Bantous, Rossignol took over the name Rock-a-Mambo. Rock-a-Mambo directed by Rossignol included, in 1970, Wuta Blaise Pasco, Tino Mwinkwa, Cam Camille , Tamar and Rossignol himself as singers, Bopol, Dave Makondele, Mageda, Eddy Mabungu on guitar, Frank Kodia on bass Zoe Matondo percussion, Gerard Kongi, Baramy, Jean on trumpet and Mangenza saxophone and trumpet. ... In 1970, Blaise Pasco, Bopol and others leave Rock-a-Mambo to form the band Rock-a-Festival. But unfortunately this band never made any public appearences due to lack of equipment. At the end of 1970 Bopol Mansiamina joined orchestra African Fiesta Sukisa of Dr. Nico Kassanda. Although musician of orchestra African Fiesta Sukisa Bopol and his riends of the Rock-a-festival band keep hoping that one day a benefactor will provide equipment for them so that they can continue. As in a fairy tale the benefactor came. It is the wife of Francis Ngombe Boseko / Maitre Taureau, a former musician.

Maitre Taureau played with Wendo in Victoria-Kin before forming his own group Vastoria. He was known at the time as one of the best Congolese dancers. Maitre Taureau is also the official organizer of the elections of Miss Congo. Owner of a bar-dancing in Yolo, a district of the town of Kalamu in Kinshasa. Maitre Taureau, also known as maitre Ngombe since 1971, also handled the affairs of Ballet Sambol-Lisano and Muzikana. His wife, a businesswoman, was at school with Marie-Antoinette Mobutu, the wife of the President of the Republic at the time.

Françoise Eboma , daughter of Maitre Ngombe, had an affair with Bopol with whom she has two daughters. And the niece of Madame Ngombe, Zozo, was with singer Tino Mwinkwa. As fathers of the children of her daughter and niece were musicians who needed equipment, Ms. Ngombe provided everything they needed to create an orchestra. This was how the orchestra Continental was started. They got more than they hoped for in particular a bus, driven from time to time by Engenge, one of the musicians. Mrs. Mobutu also purchased complete equipment for the orchestra. Pascal Wuta, Tino Mwinkwa and Bopol could now express their talents independently. Bopol brought to the new orchestra Kiambukuta Joseph / Josky, a talented singer he had met in African Fiesta Sukisa.

The difficult moments before the creation of the orchestra inspired Blaise Pasco and Bopol to write songs. One had dedicated a song to his wife Mayimona and the other to Eboma, the mother of his daughters Nicole and Tina. For those who knew what his wife had to go through when buying things at the market as the wife of a musician, Blaise Pasco wrote the song Nga Mayi Baboya.

At the time when they sought to procure equipment, some musicians who were with them in Rock-a-festival, Dave and Mageda, went to orchestra Les Grands Maquisards of Daniel Ntesa Nzitani / Dalienst. As Les Grands Maquisards played a style similar to that of African Fiesta National, orchestra Continental adopted the Subm Djoum of Afrisa International.

Luambo Makiadi / Franco had always wanted Josky Kiambukuta and Blaise Pasco in his band T. P Ok-Jazz. To realize his dream, he sends Josky Kiambukuta to ask Blaise Pasco, who is now called Wuta Mayi. Because of the Authenticity imposed by President Mobutu, Pascal became Wuta Mayandi Yundula / Wuta Mayi, Josky Kiambukuta became Kiambukuta Londa. Wuta Mayi, after some hesitation, agreed to join Tout Puissant Ok-Jazz in June 1974. He was not happy to leave his friend Tino Mwinkwa and he urged Luambo Makiadi to take Tino Mwinkwa as well. But Franco only wanted Kiambukuta and Wuta. Tino Mwinkwa later joined the other Musketeer in orchestra Veve. The Musketeers had finally managed to decapitate the orchestra Continental.

In the vocal line up of Ok-Jazz, one often saw singers from the Fiesta School. The friendship between Dalienst and Wuta Mayi was felt strongly in the song Ayant-droit of Wuta Mayi. It was then that Franco imposed (for songs in preparation) titles, in view of right of ownership. The song of Mayi Wuta dedicated to his friend Cecile Diya Odimba became Ayant Droit, that of . Kiambukuta became Propriétaire that of Ndombe Opetum Héritiee and he himself composed Locataire

Wuta Mayi and his friend Aime Kiwakana also met again in Ok-Jazz. Both singers sang together when they were with orchestra Jamel National.

There were only singers of the Rhumba Fiesta style, represented by Tabu Ley Rochereau, who joined OK Jazz, and many great guitarists such as Michelino, Papa Noel and Pierre Mandjeku Lengo / Dizzy. Luambo Makiadi, to combat Tabu Ley, encouraged members of Taby Ley’s band to join him. He kept telling Josky, Wuta Mayi, Ndombe and others: "I know why I've hired you to be at my side."

Franco also knew the talent Wuta Mayi. A lady who had a fashion house visited Franco one day. She wanted Franco to compose a song about her. "I do not compose serious songs anymore," Franco replied. "I only compose crazy songs. I'll give you three names. You must choose one of them.. If you want a song that will make your name famous go to Josky Kiambukuta. If you want an elaborate and reflective song go to Wuta Mayi. And finally, if you want an even more reflective song go to Simaro Lutumba.” After thinking, this lady chose Wuta Mayi and made an appointment with him. She recounted her life to the singer. As the lady had shared her life with an army officer, Wuta said he could compose a song but did not want to do it for his safety. "You have nothing to fear”, the lady reassured him, “Franco, your boss, will not let you fall." "Franco will not let me down, certainly," replied the singer.”But he does not live with my family and myself. When he comes to help it will be too late. The harm will already be done .... " But Wuta Mayi did not abandon this idea. Once installed in Europe, Wuta wrote this song, but unfortunately, it was banned from airwaves.

In the early eighties, Congolese began to move en masse to Western Europe, Congolese artists were also beginning to settle. Many of them had small jobs on the fringes of music. Few people could live exclusively from their art. One group was created in Paris in October 1982 on the initiative of David Ouattara, a producer of Ivorian origin. He brought together Syran Mbenza, Bopol Mansiamina, Wuta Mayi and Nyboma and proposed to them to create Quatre Etoiles. These two guitarists and two singers released their first album late December of that year. These four big stars of modern Congolese music, though free to manage their respective careers regardless of the group, agreed from the outset to give each at least one song per year for albums of Quatre Etoiles. Their second album was released a year later. But the four stars did not stay with the same producer. They went to Syllart Production of Ibrahim Sylla. ..." [1] 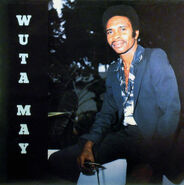 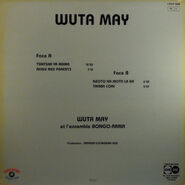 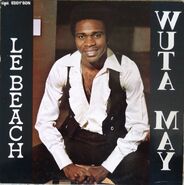 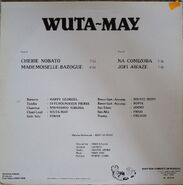 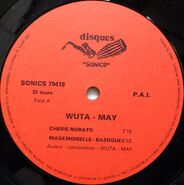 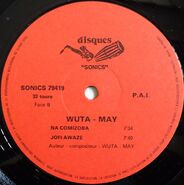 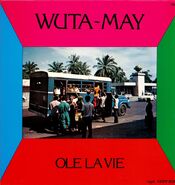 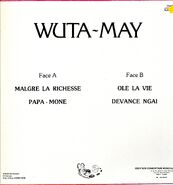 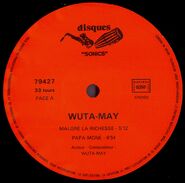 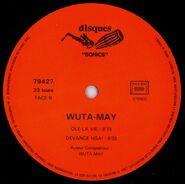 Retrieved from "https://ricorodriguez.fandom.com/wiki/Wuta_Mayi?oldid=5549"
Community content is available under CC-BY-SA unless otherwise noted.